Cody is a third-year PhD student in the Elimelech Research Group, part of the Department of Chemical and Environmental Engineering at Yale University.

Cody received his B.S. and M.S. in Civil Engineering from North Dakota State University (NDSU), where his research focused on developing phosphate-selective sorbents for mitigation of eutrophic surface waters and reuse as soil amendments to develop a more sustainable phosphate usage cycle. His intensive involvement in research at NDSU and STEM outreach in the Fargo community inspired him to pursue the National Science Foundation Graduate Research Fellowship (NSF GRF), which he received in 2016.

Now at Yale, his research has focused on topics ranging from Monte Carlo simulations of desalination across 2D nanomaterial membranes to experimentally elucidating the mechanisms which govern carboxyl deprotonation across membrane films. His results indicate that extreme confinement plays a critical role in membrane transport phenomena. Cody believes we must fully understand transport mechanisms under nanoconfinement to design the next generation of membranes. Therefore, he will employ solid-state nanofluidics as model systems for nanoconfined transport during his PhD. These model systems will allow him to dive into the fundamentals of slip flow, water-solute selectivity, and solute-solute selectivity.

Outside of the lab, Cody enjoys a host of outdoor activities such as hiking, hunting, fishing, playing rugby and much more. Being a Minnesota native, he is always avidly cheering on his hometown teams and wearing shorts much further into the Fall season than he should. Of course, it would be remiss not to mention Cody’s better half, Nadeen. Whether it be lab group outings or spontaneous adventures around New England, his wife, Nadeen, and dog, Mikko, are always by his side. 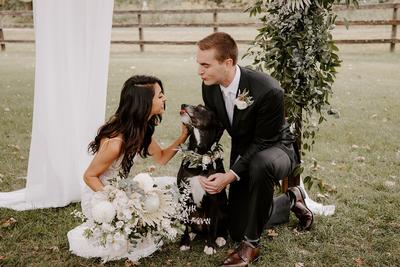