Research at the Nexus

Water scarcity is one of the foremost challenges of the 21st century, affecting roughly 4 billion people globally. To combat water scarcity issues, water purification technologies will be increasingly needed to produce drinking water from unconventional sources such as seawater, brackish groundwater, and wastewater.  Membrane-based processes typically offer superior energy-efficiency, reliability, and water quality compared to conventional processes. Critical to these processes is the membrane itself. Through our research, we seek to fundamentally understand how material characteristics (such as permeability, selectivity, and surface chemistry/morphology) affect membrane performance under realistic process conditions, and to utilize this knowledge to design improved membranes.

The Trade-off between Membrane Permeability and Selectivity

Reverse osmosis (RO) is the main desalination technology today—and likely in the future—largely owing to its relatively high energy efficiency. RO also plays a central role in advanced wastewater treatment plants, which enable potable reuse of municipal wastewater. Thin-film composite (TFC) membranes, which comprise a thin (<200 nm) aromatic polyamide selective layer and a porous polymeric support layer, have dominated RO for >20 years, but only marginal improvements in performance have been achieved during that time. While TFC membranes perform quite well (up to 99.85% salt rejection), their performance follows a permeability/selectivity trade-off. In other words, to achieve greater water permeability, water/salt selectivity is typically sacrificed, and vice versa.  Therefore, in order to obtain improved performance, new membrane materials will be needed. 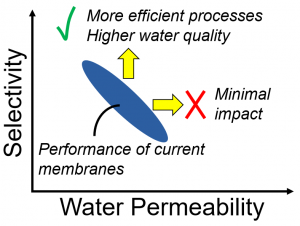 Current RO membranes (polymeric thin-film composite, or TFC, membranes) are constrained by a permeability/selectivity tradeoff. Breaking this tradeoff will require novel membrane materials. Our previous analysis has shown that increased selectivity is the most impactful goal, which guides much of our current research.

Our research addresses this issue in several ways. In the past, we determined the tradeoff relationship for TFC membranes. We then considered what the impact would be if the tradeoff could be broken, finding that increased water permeability (above current levels) would have minimal impact. In particular, increased water permeability would minimally impact the energy needed for desalination. In contrast, increased selectivity (for water over ions and water over neutral solutes) could be highly beneficial, and thus serves as a guiding principle for much of our research.  Our current work in this area is to determine the performance limits of next-generation desalination membranes and to create material platforms that could allow for ultra-selectivity in desalination.

Biomimetic desalination membranes have great potential for breaking the permeability/selectivity tradeoff. As implied by the name, biomimetic membrane selective layers take their inspiration from biological cell membranes, and consist of selective channels that allow for water passage while screening solutes (ideally based on size) embedded within an amphiphilic matrix (e.g., a block copolymer bilayer). Such channels can be biological (e.g., aquaporin) or synthetic (e.g., carbon nanotubes, stacked macrocycles).  Our previous work in this area largely focused on the alignment of carbon nanotubes within a polymeric selective layer. Currently, we focus mostly on aquaporin, nature’s water channel. Aquaporin has high water permeability and near-perfect selectivity—owing to a hydrophobic channel with single-file water transport and a charged water-sized constriction near the channel center, respectively—making it a potentially excellent selective agent in desalination. Our current work is to use solution- and surface-based techniques to fundamentally characterize the transport behavior of model biomimetic selective layers, and to fabricate novel biomimetic membranes using controlled polymerization techniques, in collaboration with Prof. Mingjiang Zhong.

Special surface wettability of materials and interfaces engineered by nanotechnology can be effectively leveraged to membrane processes. We have proposed an omniphobic membrane, which repels both water and oil, as an essential component of membrane distillation (MD). Omniphobic membranes can extend MD application for desalination of challenging high-salinity wastewaters containing diverse low surface tension contaminants. We have developed different approaches to fabricate omniphobic membranes based on inorganic and organic nanomaterials. Fundamental understanding of factors affecting surface omniphobicity is a crucial part of our research to improve omniphobic MD membrane design and performance. Our work has demonstrated that tailoring surface energy and nanostructure is the key to fabricating a robust omniphobic MD membrane. We are also investigating practical impacts of omniphobic membrane including its fouling and scaling behaviors.

Membrane-based Technologies at the Water-Energy Nexus

The United Nations estimates that 1.8 billion people currently live in countries experiencing absolute water scarcity.  Unchecked, current trends in water consumption will lead to a 40% shortfall in water supplies by 2030.  The desalination of saline waters, including seawater, brackish water and wastewater, is one of the most effective ways of augmenting the supply of high-quality water. However, the desalination of seawater and high-salinity wastewaters is energy intensive.  Globally, energy generation accounts for around 15% of freshwater withdrawals.   This reciprocal interdependence between water production and energy generation forms the basis of the Water-Energy Nexus.  Membrane-based technologies that are capable of using low-grade or waste heat to desalinate saline water or generate electrical energy—including membrane distillation, forward osmosis, and thermo-osmotic energy conversion—lie at the center of the Water-Energy Nexus. 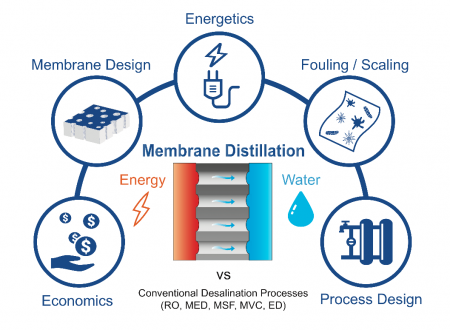 Membrane distillation (MD) uses low-grade or waste heat sources (< 100 °C) to heat a saline feed stream before contacting it with a cooler pure permeate stream across a hydrophobic membrane. Water evaporates at the feed-side of the membrane, while non-volatile contaminants remain in the saline feed solution.  Driven by a partial vapor pressure difference between the warm feed-side and the cool permeate-side, water vapor then diffuses through the air trapped in the membrane pores, condensing into the permeate stream at the permeate-side of the membrane.

By exploiting the strong dependence of the partial vapor pressure of water vapor on temperature, MD is able to desalinate high-salinity waters, which cannot be desalinated by reverse osmosis, using low-grade heat.  The Elimelech Group’s research focuses on improving the energy efficiency of MD from the perspective of the Water-Energy Nexus.  Reducing the mass transfer resistance of MD membranes, through developing novel membrane structures, and optimizing heat recovery in an MD desalination system, can drive down energy consumption and the quality or temperature of heat required for desalination.  In addition, the development of omniphobic membranes, which can resist wetting by low surface tension contaminants, have the potential to greatly enhance the robustness of MD desalination.

A schematic of a membrane distillation desalination system with heat recovery. Feed and permeate streams are recycled to enable high water recovery ratios. (B) Mass and heat transport across a hydrophobic MD membrane. Water evaporates at the feed-side membrane-solution interface before water vapor diffuses through the air trapped in the membrane pores and condenses at the permeate-side membrane-solution interface.

Forward osmosis (FO) is a recently developed two-step desalination process that is capable of using low-grade heat to desalinate highly saline waters.  In the first stage, saline feed water is contacted with a draw solution across a semi-permeable membrane that allows water to permeate while rejecting most dissolved solutes.  The draw solution has a higher osmotic pressure than the feed, creating a chemical potential gradient that drives the permeation of water through a semi-permeable membrane from the feed stream into the draw stream.  In the second stage, desalinated water is extracted from the diluted draw stream, regenerating the draw solution.  Draw solutions are engineered to enable the separation process in the second stage to use low-grade heat.  For example, thermolytic draw solutes, such as ammonia–carbon dioxide, may be stripped from the draw solution using low temperature distillation.

Unlike reverse osmosis, FO does not require high hydraulic pressures, enabling it to treat high salinity waters, including wastewaters from industrial processes and unconventional oil and gas extraction.  The Elimelech Group’s research focuses on improving our understanding of the solute permeability of polymeric FO membranes, particularly at high draw solute concentrations, in addition to developing membranes with increased fouling and scaling resistance. 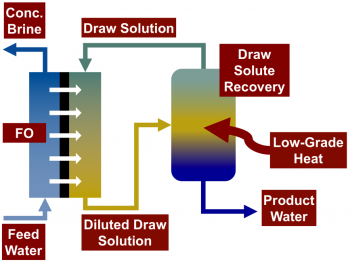 A schematic of a forward osmosis desalination system with draw solute recovery. FO systems commonly use thermolytic draw solutes that can be regenerated from the draw solution using low-grade or low-temperature heat. 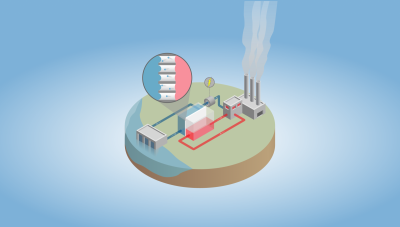 Thermo-osmotic energy conversion (TOEC) employs a hydrophobic porous membrane and a temperature gradient to generate a flow of water against a hydraulic pressure difference. This pressurized flow of water is then used to drive a turbine and generate power. TOEC technology holds a great potential since the Kelvin Equation in equilibrium condition predicts that a potential hydraulic pressure of hundreds of bars can be generated by relatively low-temperature differences.

During the TOEC process, wetting can occur when the hydraulic pressure difference across the membrane exceeds the liquid entry pressure (LEP) of the hydrophobic membranes. A high LEP is critical for TOEC, which must operate at high pressures to maximize the power density and efficiency. However, the small pore size needed for a high LEP increases transport resistances. The Elimelech Group’s research focuses on the fundamental transport in TOEC process as well as membrane and system optimization for TOEC technology.

Environmental Applications and Implications of Nanomaterials

Nanomaterials have unique properties that can differ significantly from bulk materials of the same chemistry, thereby attracting substantial research interest over the past decade. We are interested in elucidating antibacterial mechanisms of the emerging nanomaterials (e.g., two-dimensional graphene oxide) to assess potential environmental risk associated with the production and discharge of these nanomaterials. Additionally, we are interested in utilizing exceptional physiochemical properties, through the engineered application of nanomaterials, to address environmental challenges, particularly focusing on developing anti-fouling membranes for water treatment.

Graphene oxide (GO) is cytotoxic towards a variety of cell types. Deeper understanding of biological interactions and reactivity with GO is important in order to evaluate its potential ecological impact and usage in engineered applications.

We have shown that the cytotoxicity could be largely ascribed to both physical and chemical effects. In particular, by leveraging the alignability of GO nanosheets in a magnetic field, we are able to control the orientation of GO nanosheets when interacting with bacterial cells, which expounded the mechanism of edge-mediated physical disruption. Additionally, we also revealed the direct electron-transfer induced toxicity of GO using model systems. Both of these physical and chemical mechanisms require nanosheet penetration of the cell membrane, thereby highlighting the importance of edges in rendering the overall cytotoxicity of GO nanosheets. We hope that these findings not only provide empirical evidence that an orientation-dependent physical piercing mechanism contributes to the cytotoxicity of GO but also offer lessons for the design of surfaces using graphene-based nanomaterials in engineered applications. 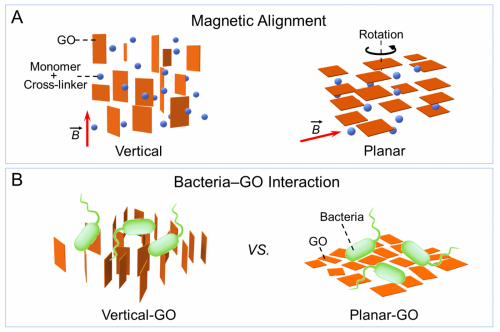 In membrane applications, fouling is an inescapable truth due to the inevitable deposition of foulants, including bacterial cells, organic molecules, and inorganic scalants. Through post-fabrication modification of membranes with nanomaterials, properties such as membrane cytotoxicity and hydrophilicity can be augmented without disrupting other membrane properties. These types of fine property modifications can reduce a membrane’s propensity for organic and biological fouling.

Our previous efforts in this area include membrane functionalization with biocide-releasing nanomaterials (i.e., silver or polymer particles) for antimicrobial effect. We recently turned our research interest into the application of 2D nanomaterials (i.e., GO or MoS2) for non-depleting, contact-action bacterial inactivation on membrane surfaces. Currently, several of the Elimelech Group’s ongoing projects involve the use of bio-inspired chemistry or UV-induced crosslinkers. Another interesting topic we are pursuing is the fabrication of vertically-aligned GO membranes using a superconductive magnetic field through collaboration with Professor Chinedum Osuji. In these membranes, we aim to achieve the highest density of edges with vertical orientation to maximize the edge-mediated toxicity for bacterial deactivation. 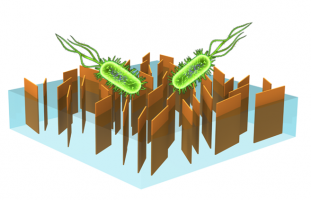 Schematic showing a desalination membrane with vertically-aligned GO exposed on the surface for biofouling control. The GO edges act as sharp blades which inactivate bacterial cells upon contact by piercing the cell wall and membrane.